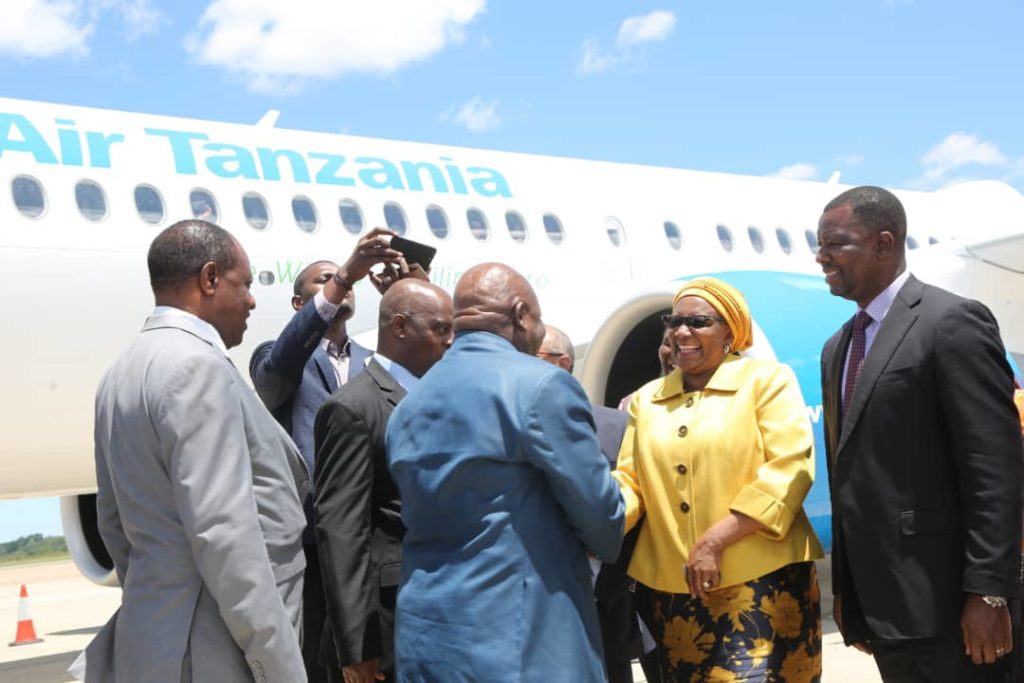 HARARE – Air Tanzania flew its Airbus A220-300 – the only one operated by an Africa-based airline – to Harare on Friday as it launched its three-days-a-week service between Dar es Salaam and Harare.

Tourism Minister Prisca Mupfumira welcomed Tanzania’s Minister of Transport Isack Kamwele who was on the inaugural flight into the Robert Mugabe International Airport.

Flight 5H-TCI received the traditional water cannon salute after it landed in Harare and taxied from the runway to the apron where passengers then disembarked.

Lusaka and Harare are the first two regional routes Air Tanzania relaunched, soon to be followed by flights to Johannesburg, essentially taking back routes once upon a time operated by Fastjet before that airline lost their operating licence.

Air Tanzania also intends to launch their first long haul flight, using their Boeing B787 Dreamliner, when – as early as next month – services to Mumbai, India, will be launched.

“This historic re-launch is expected to open a whole chapter from an economic point of view as it enables our citizens to enjoy our diverse tourist attractions, which include Mt Kilimanjaro and Zanzibar in Tanzania and locally the majestic Victoria Falls and the Great Zimbabwe, as well as improved trade and commerce between the two countries. This increased connectivity will make it easier for tourists around the world to visit these attractions for the benefit of our states,” Mupfumira said.

Officials would not speak on the record but it is understood Air Tanzania is in talks with the Zimbabwe Civil Aviation Authority for flights to Victoria Falls starting in mid-July. The airline is said to be planning flights, three times a week, between Kilimanjaro International Airport and Victoria Falls.

Tourists will be able, once the route has been officially confirmed, to go on Safari in East Africa, then fly to Victoria Falls to see not just the falls of the mighty Zambezi River but also visit nearby parks, and then continue their trip either to South Africa or other neighbouring countries.