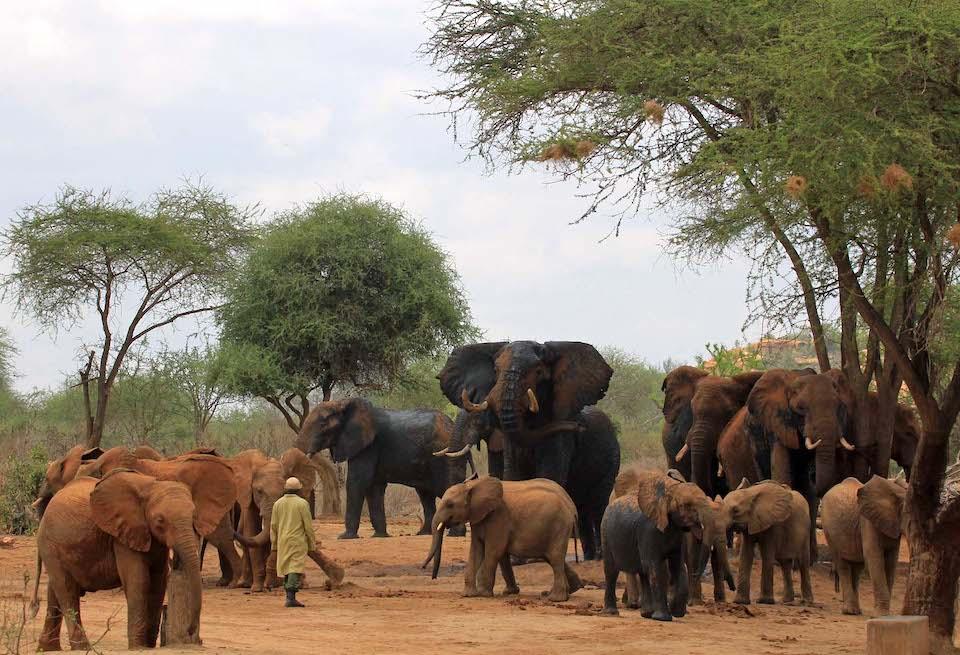 In August of 2009 an elephant calf was seen wandering alone near Kenya’s South Turkana National Reserve. No one knew why it was alone. Its mother may have been killed for ivory or meat, or may have perished from drought, illness, or injury. The calf was entering an extremely dangerous conflict zone. The common intertribal raiding in the region had intensified because of drought; there was little water or grass for livestock. Despite the danger—the tribes were armed with automatic weapons—a team of people caught the calf and took it to a rescue facility adjacent to Nairobi National Park. The female calf was about four months old. They named her Turkwel, after a village and river near where she was found.

Seven years ago I discovered the website for the rescue organization, the David Sheldrick Wildlife Trust (now Sheldrick Wildlife Trust). I decided then and there to foster Turkwel because, well, how can you not love a baby elephant named Turkwel? Fostering an orphan costs $50 per year; I now foster three. I get monthly updates on their status, and stories of new babies who may have been found trapped in a well or latrine pit, or crying over the mutilated body of their mother, poached for her tusks. Rescues occur frequently all over Kenya, within and outside of protected areas.

Last October, I got to meet dozens of the orphans firsthand, as well as numerous ex-orphans now living wild, and was immersed in one of the world’s most successful wildlife rescue programs. This work is happening within, and in collaboration with Nairobi and Tsavo national parks, and with the Kenya Wildlife Service (KWS), which administers Kenya’s national parks. This world renowned program was launched by a women with deep passion and a strong commitment to wildlife: Dame Daphne Sheldrick.

Daphne lived in Tsavo and near Nairobi National Park for many years, and rescued a wide variety of species, including elephant, rhino, zebra, Cape buffalo, impala, kudu, eland, civet, mongoose, warthog, and ostrich, among others. Through trial and error, she learned how to help them survive and thrive. She determined, for example, that rhinos and zebras did well on Lactogen baby formula, and baby elephants could not tolerate cow’s milk. In a last ditch effort to save one young elephant, she tried a formula containing coconut oil—and it worked. This same orphan taught Daphne that elephants can become too attached to humans; he became ill due to separation anxiety while Daphne was away, and died soon after she returned.

The Trust helps many different species in need, but most of their efforts go to elephants. As of January, 2019, the Trust’s Orphans Project was supporting 19 elephants, 1 black rhino, 1 giraffe, and 1 very young white rhino at their Nairobi Nursery, and 62 elephants at reintegration units. To illustrate the program’s success, 150 rescued orphan elephants are now living wild; and in 2018, the 30th baby born to a wild ex-orphan came into the world. The staff are eagerly awaiting the imminent arrival of number thirty-one. 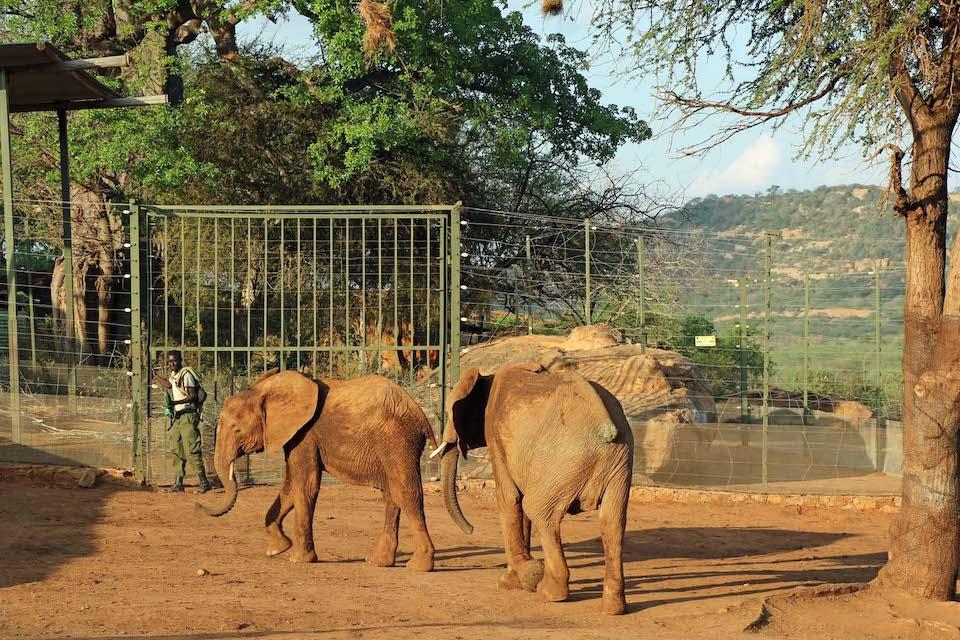 In addition to caring for the orphans, the Trust protects them after they return to the wild. Together, the Trust and KWS operate nine Anti-Poaching Units (eight in the Tsavo area); four Mobile Veterinary Units; and an Aerial Surveillance Unit.

The first stop for rescued orphans is the Nairobi Nursery, adjacent to Nairobi National Park. This was also our first stop. At the nursery we watched the orphans’ 11 a.m. bottle feeding; an evening feeding followed by a visit with the babies in their pens (stockades) and their caretakers (known as Keepers); and an afternoon feeding, after which we mingled with the elephants as they took dust baths, browsed in the adjacent bush, and tried to steal flowers planted around the facility. This latter visit—one of the most incredible experiences of my life—was private, for just our small group. I’m hard-pressed to describe it. Nothing compares to standing in the middle of a herd of about 20 young elephants, each weighing from 300 to over 1000 pounds, as they go about their business. They were polite, calm, and completely unafraid of people. Occasionally one would pass very close by on its way to a desired cluster of leaves, so, while you were photographing one, another would bump you from behind. The bumps were never serious, and I wondered if the orphans viewed humans as oddly-shaped elephants.

When orphans arrive they get needed veterinary attention and then 24/7 care from the Keepers, who work hard to stand in for the orphans’ lost elephant families. Keepers spend nights on raised platforms with the infants, and rotate frequently so no one becomes too attached (the attachments do go both ways). Initially, orphans are fed on demand, frequently and in small quantities, and eventually they settle into feeding every three hours. National Geographic writer Charles Siebert once asked a Keeper if he used an alarm clock to wake up for feedings. The Keeper said no, every three hours the baby would reach up with its trunk to pull the Keeper’s blankets off (National Geographic Magazine, September, 2011).